Role of Oil and Natural Gas in Economy

Petrotech 2019: The 13th edition of International Conference and Exhibition PETROTECH 2019, was organized by Oil and Natural Gas Corporation Limited (ONGC), in association with Federation of Indian Petroleum Industry (FIPI), under the aegis of the Ministry of Petroleum and Natural Gas. It is a biennial platform for national and international experts in the oil and gas industry to exchange views and share knowledge, expertise, and experiences.

Theme: Shaping the New Energy World through innovation and Collaboration

Oil & Gas sector is a key contributor to India’s economy and accounted for almost 55% of our energy mix in 2017.

India is the third largest consumer of crude oil and petroleum products in the world, accounting for 4.5 per cent of global oil consumption, behind the US and China.

Indian Oil and Gas companies are present in 28 countries with investments worth approximately 38 billion US dollars.

National Data Repository has been set up to facilitate potential investors to take informed decisions based on the geo-scientific data of hydrocarbon resources in the country.

Prominent global trends are shaping up in this regard — for instance, the big shift in energy consumption from Europe to Asia, the United States becoming the world’s largest oil and gas producer after the shale revolution, solar energy emerging as a competitive and most sustainable energy alternative, share of natural gas in the global energy mix rising, convergence of cheaper renewable energy technologies, digital applications and the rising role of electricity forming the basis for achieving many of the world’s sustainable development goals, and countries coming together to tackle climate change, including through global collaboration such as the International Solar Alliance (ISA).

India to be turned as a Gas based Economy

Natural gas remains the fastest growing fossil fuel globally, benefiting from its flexibility, competitive economics, and low emissions profile. Thus, natural gas is called to play a major role in the energy transition, supported by the industrialisation and power demand particularly in emerging countries in Asia and Africa, and the continued ‘coal to gas’ switch, especially in India and China.

India has over 16,000 km long gas pipeline network and additionally another 14,000 km gas pipelines are under different stages of construction.

The government has embarked upon the ambitious projects such as 3,200-km-long Pradhan Mantri Urja Ganga Project and 1,600-km-long Indradhanush Gas Grid to connect eastern and northeastern parts of India with the National Gas Grid.

The LNG infrastructure in the country is also being expanded rapidly. New LNG terminals are under construction on both the east and west coasts of the country.

UJJWALA scheme, under which 64 million households have been provided the LPG connections, enhancing access to clean cooking fuel which is called as the Blue Flame Revolution.

India is shifting directly from BS-IV to BS-VI standards for fuel from April 2020. The supply of BS VI quality fuel has already begun in national capital of Delhi from April 2018.

Ethanol Blended Petrol Program is being implemented and National Biofuel Policy to promote alternate fuels has been introduced.

In next few years 70% of India’s population and 53 % of the country’s area shall get covered with city gas distribution networks.

LNG is being promoted as a transport fuel for long-haul trucking along expressways, industrial corridors and inside mining areas.

Hundred per cent electrification of households in India, through a targeted programme called SAUBHAGYA.

LED bulbs distributed across the country under the UJALA scheme, have resulted in an annual saving of seventeen thousand crore rupees, or nearly 2.5 billion dollars.

The Enhanced Oil Recovery Policy aims to promote the use of latest technology in improving productivity of upstream fields.

The necessity of creating a more conducive business environment for India to be an energy destination:

There is a need to increase supply three to four times over the next two decades and a need to redesign policy and technology initiatives in order to get back to the high growth trajectory envisioned.

Within the energy sector, hydrocarbons need special attention to bridge the ever-increasing gap between demand and domestic supply.

Partnerships and collaborations between various stakeholders can help improve recovery from mature fields, exploitation of ultra-deep-water energy reserves and progress in complex frontier areas through the adoption of international best practices.

By adopting the latest benchmarked technological solutions, there can be advancements in the production of upstream, midstream, downstream, liquified natural gas and unconventional hydrocarbons.

The present supply-demand dynamic needs to be studied along with the changing energy scenario and future projections, which take into account the economic, environmental and geopolitical implications of alternative energy landscapes. The best available sources of energy, likely prices and technological options in the coming years have to be factored into the nation’s policy formulation.

For too long, the world has seen crude prices on a roller-coaster. We need to move to responsible pricing, which balances the interests of both the producer and consumer. We also need to move towards transparent and flexible markets for both oil and gas. Only then can we serve the energy needs of humanity in an optimal manner. 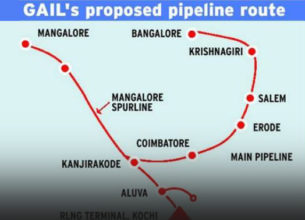